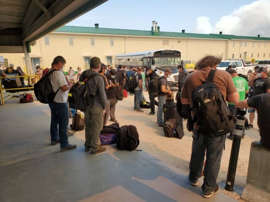 Operations at the Cigar Lake uranium mine in northern Saskatchewan are set to resume later this week after much of its workforce was evacuated due to a nearby wildfire.

The Cameco Corporation announced in a news release on Sunday that the nearly 230 employees and contractors who were evacuated on Thursday are being transported back to the mine.

The workers were moved as a safety precaution due to the proximity of the Briggs wildfire.

Only about 80 people remained at the facility to keep it in a safe state.As of Friday, the fire had moved past the facility "without serious impact to the site," according to Cameco,Now, the company says consultations with the Saskatchewan Public Safety Agency have helped them determine that the risk to the facility from the fire has now subsided.The mine could resume operations in the coming days.The Briggs fire remains uncontained and measured more than 22,000 hectares on […]