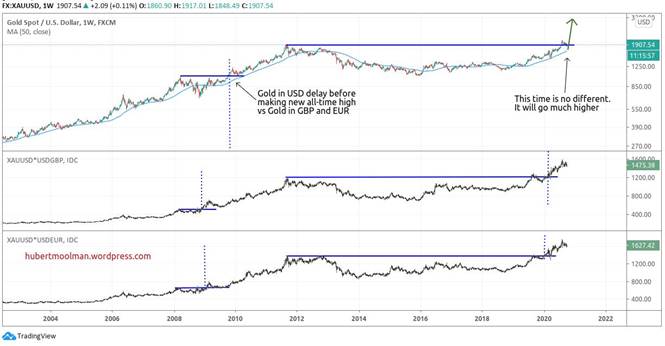 Gold is trading really close to its 2011 all-time high. This is obviously a critical level for the future of gold prices.

Historically gold in US dollars often clears significant all-time highs only some time after significant currencies like the Euro and British pound.

This is mainly due to US dollar behaviour during times of significant risk aversion, like we’ve had this year and 2008, for example.

The following charts comparing gold in USD, in GBP and in Euro shows just that: Gold in USD only surpassed its significant March 2008 high about a year after gold in GBP and Euro did it. We have a similar setup where gold in GBP and Euro already hit their 2012 high around August 2019.Both GBP gold and Euro gold are sitting comfortably above their 2012 high. History strongly suggests that USD gold will follow and get comfortably above the 2012 high real soon.The US […]