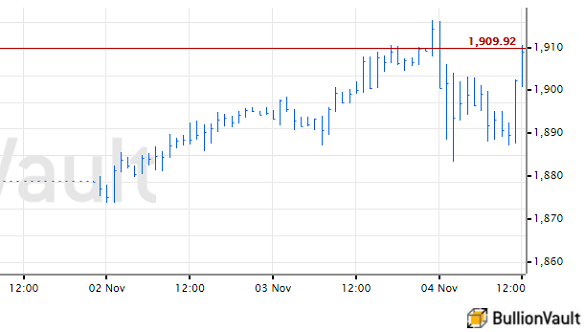 Spiking to $1916 as US polls began closing last night, gold prices then sank by $30 per ounce before regaining almost all that drop by lunchtime in London.

Global financial markets also echoed but lagged the dramatic action when current White House incumbent Donald Trump won the 2016 election against Hillary Clinton, as challenger Joe Biden edged ahead in both the popular vote and electoral college for the presidency, but the all-important Senate looked to be held by the Republicans.

That saw longer-term interest rates fall at the fastest 1-day pace since April, down 10 basis points on 10-year US government bonds to 0.80% per annum, reversing the last week’s rise.But European equities then turned a 1.2% drop into a 1.1% gain, […]